Do All Golf Balls Weigh the Same? Golf Ball Size

At some point, you’ve probably wondered, do all golf balls weigh the same or are all golf balls the same size? The answer is no, but most new golf balls share nearly identical attributes, including size and weight.

I want to take a moment to dig deeper into some common golf ball size and weight questions, so if you want the golf ball crash-course, here it is.

I’m not a big fan of bureaucracy, but in the case of golf ball weight, I’m glad we have some regulating bodies that set the rules.

Can you imagine a tournament where there were all sorts of golf balls with different weights and sizes? What a mess! Even just shopping for a dozen golf ball would become a headache.

So if you’re wondering “How much does a golf ball weigh?”… the answer isn’t as straightforward as it might seem.

So do popular brands experiment with a light ball or a heavy ball? Behind the scenes, I’m sure they have some fun, but you’re going to find very similar products on the golf course, regardless of the flexibility that the rules allow for.

David Richards over at Ivy Golf did some great research in this department. He took 52 different golf ball models in varying conditions. His breakdown looked something like this:

Every ball was cleaned before being weighed on 3 different digital scales.

Do all golf balls weigh the same?

Not quite. His research showed that new golf balls are slightly heavier than balls in average condition, but the weight differences become more apparent when you compare an average ball with a ball in poor condition.

The average golfer would never know that this difference existed, especially since Mr. Richards’ testing found that most golf balls in average condition all weighed within .3 grams of the 45.93g limit.

It’s still worth noting however, not all golf balls weigh the same. A Pinnacle ball has a different weight than a Dunlop ball, but all golf ball manufacturers are working near the same basic guidelines.

Will these differences affect your golf game? Probably not. If you were playing in the Open Championship, you would be playing with mostly new golf balls, so from the highest levels of competition down to your local muni course, the product is pretty similar.

Again, we’re talking about tenths of a gram.

Are all golf balls the same size?

No, there can be variations in the size of a golf ball, but all golf balls must be at least 1.68 inches (or 42.67 millimeters) in diameter.

This wasn’t always the case. In fact, the current rule wasn’t adopted fully by the USGA and the British R&A until January 1, 1990.

For many years, the British ball had a minimum diameter of 1.62 inches. The weight of the American ball and the British ball were the same (the Brits weren’t playing with a lighter ball), but the smaller ball actually had a flight and distance advantage.

Don’t believe me? The proof is in the pudding. American golfers would switch to the smaller British ball when they played in The R&A’s Open Championship.

Golf ball construction had to be standardized so that the professional and the amateur golfer were on equal footing. This universal standard eliminated [some] whining and excuses. It also made life easier for manufacturers to streamline their production.

When did the golf ball change size?

Over the years, golf balls have changed size according to the various rules and regulations by the ruling bodies.

Discussions for worldwide standardization began in the 1950s, continued into the 1970s and were finally agreed upon in 1990. That’s when all governing bodies agreed that a golf ball must be at least 1.68 inches in diameter and weigh no more than 1.62 ounces.

Not the quickest turnaround, but everyone eventually came to their senses.

The British R&A fought to keep British golf balls at 1.62 inches for some time, but as the game became more global so it was best to keep the US and UK rules the same for convenience.

Recommended Reading: Everything You Ever Wanted to Know About Golf Balls

What is the size of a golf ball in centimeters?

In centimeters, the golf ball is 4.268cm or 42.67mm in diameter which is equal to 1.68 inches. All professionals must meet these requirements at minimum to be accepted for tournaments.

The United States Golf Association (also known as USGA) checks all golf balls and publishes a list of accepted balls that adhere to these standards.

In 1891, the Royal and Ancient Golf Club of St Andrews (R&A) standardized the size for golf holes at 4.25 inches. This coincided with the invention and adoption of the first hole cutter, which just so happened to cut at those dimensions.

Before 1891, the size of the hole was much larger on some course, even reaching up to 6 inches.

Over the years, there has been discussion for wider holes. Some courses even offer two holes on each green. One of the holes is cut larger to encourage youth or beginning golfers.

Don’t expect any changes in this department moving forward.

The sport makes the most sense when everyone’s working with golf balls that share a similar size and weight. These golf ball standards help level the playing field.

PGA tour golfers (and weekend golfers) need to focus on their actual performance by improving clubhead speed, swing speed and ball speed instead of just gaming the system with a smaller golf ball.

Even though the weight and diameter of all golf balls are pretty similar, there are ways that a golf ball can be tailored for better feel, distance or trajectory. The top brands are all fighting to create the best golf ball for players with varying skill sets. This is why you see different golf ball dimples, low compression balls, etc. Here’s my favorite: 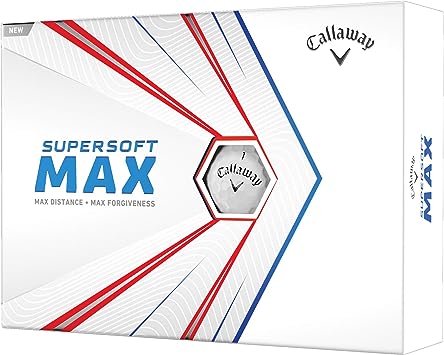 Callaway Supersoft Max Golf Balls See on Amazon See on Callaway
We may earn a commission if you click this link and make a purchase.

I’d love to know what ball you use to maximize your golf game. Please share your recommendation in the comments below.