How Far Can Tiger Woods Hit A Golf Ball?

Tiger Woods is the most famous golfer of this generation, and although he’s moved past the prime of his career, people still ask:

How far can Tiger Woods hit a golf ball?

Every aspect of Tiger’s game was incredibly strong, but during his prominent years, some would argue he was most famous for his powerful drives. Back in 1997, Tiger’s average driving distance was 294.8 yards (second only to John Daly’s 302 yard average).

Times have changed drastically over the last 20+ years. Today’s Tour pros take their physique much more seriously than golfers of the past. As a result of improved strength and technology, Tiger’s numbers don’t seem that impressive to the modern viewer, but back in the late 90s and early 2000s, Tiger’s ability to drive the ball so much further than the competition was a major advantage.

Woods and Daly were the Bryson Dechambeau(s) of their time distance-wise, but Tiger’s pinpoint accuracy and short game put him on another level.

Woods often reached the green a stroke or two before the competition. This led to an arms race as golfers tried desperately to keep up.

What was Tiger Woods Longest Drive?

The furthest Tiger ever hit the ball off the tee was a mammoth 498-yard drive on the 18th hole at the Plantation Course in Hawaii during the 2002 Mercedes Championship.

The drive itself ranks among some of the longest drives ever hit during professional play, and while some drives have gone further, few shots at this distance achieve the accuracy that Tiger is known for.

Keep in mind, Woods did this back in 2002. Golf club technology has changed drastically over the last twenty years, so his drive was a BOMB for it’s time.

This shot was something of an outlier, as it was hit in favorable conditions and on a hole notorious for producing huge drives, but Tiger was a Golf Channel & Golf Digest staple for a reason. His big hits and his superior accuracy are already cemented into PGA Tour history…just don’t expect to see those kinds of numbers at his upcoming PNC Championship event.

How far does Tiger hit his irons?

Though we don’t have a great recent data to pull from, in the past Tiger Woods distance numbers looked something like this:

Can intermediate golfers produce the same numbers at their local golf course? Sure. With the right golf ball, a fast swing speed and other modern technology, those numbers no longer seem that far out of reach.

Tiger was clutch, and his average distances only tell part of the story.

Just ask Dustin Johnson, Justin Thomas or Rory McIlroy how hard it is to stay on top. 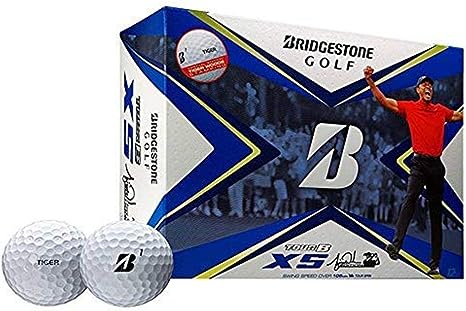 This ball was produced by a direct collaboration between Tiger and Bridgestone Golf. It is the actual ball that he plays with.

Buy Now
We may earn a commission if you click this link and make a purchase.

These were typically quite stiff clubs and compared to today’s materials they were relatively simple, but Tiger nonetheless outdrove much of his competition with these older style clubs. Tiger’s dominance began to wane as new club designs and materials were introduced.

Graphite clubs allowed for greater flex and the generation of added force which golfers used to generate more distance off the tee. Even though the writing was on the wall for steel-shafted clubs, Tiger continued to use them for much longer than most other professionals, and he regularly drove further than competitors using the latest materials and designs.

The reason for Tiger’s stubbornness isn’t known, however, it is a clear sign of his natural physical ability and his mastery over technique. When Tiger did eventually move on from the steel-shafted clubs and begin using a graphite shafted driver, he immediately began to reassert his dominance in terms of distance and power which is a testament to his consistency, hard work, and natural talent.

You don’t win a PGA Championship because of a golf club shaft, you win because you’ve mastered your craft.

Tiger’s technique is very specific and he even has a special maneuver for trying to extract as much speed and distance as possible from his shots.When he wants to try and grab an additional 25 to 30 yards he will use his lower body to create leverage.

He does this by locking his leg straight just before he impacts the ball which allows his hips to move faster and clear quickly, which adds additional force and also increases the speed his upper body follows through. This is critical as the speed at which the club is swung is a huge factor in adding distance and power to any shot.

As you can imagine, these movements create a ton of wear and tear over the years. It’s no surprise that Tiger has gone through a number of surgeries to try to get back to full health.

Tiger’s stance for tee shots was usually quite wide, and certainly much wider than his stance with other clubs such as hybrids or irons on the fairway. A wide stance is great for balance and stability to the stroke, which allowed him to make the best use of a very wide swing.

All of these minute adjustments and techniques were the key to Tiger’s ability to hit 300 yards with consistency and accuracy. Superior clubhead speed and solid contact is what sets a PGA tour pro apart from the average golfer.

Perhaps Tiger’s biggest contribution to the world of golf was his focus on athleticism, strength, and power.

When Tiger turned pro back in the 90’s it was still common for golfers to smoke and drink prodigiously. Little emphasis was placed on physical fitness and training.

Tiger changed all this, and his rigorous training and discipline are what allowed him to outperform most of his colleagues in the early part of his career, and it’s also what has allowed him to continue to compete even today.

Nearly all pro golfers today do some sort of strength training. This development has given golf a revamped image as a truly athletic sport requiring not only talent but peak physical conditioning.

Recommended Reading: What Ball Does Tiger Woods Use?